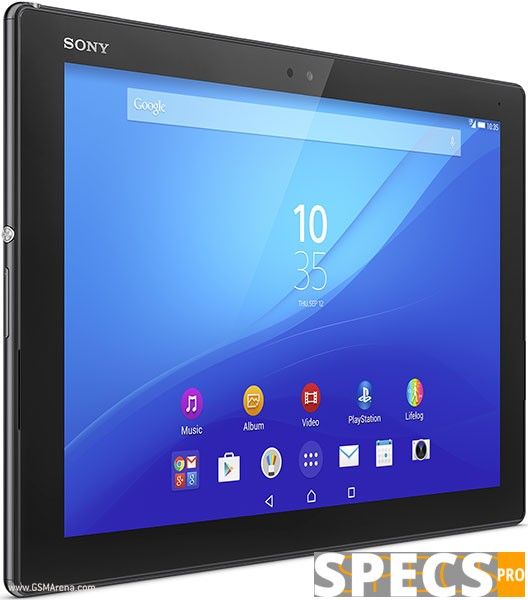 The Sony Xperia Z4 Tablet WiFi is one of the expensive 10.1 inch tablets on the market. The lowest tab's price in USA is $709.90

The Xperia Z4 Tablet WiFi is released with Android 5.0 (Lollipop) - the most popular operating system on the market. For now 5.0 (Lollipop) is already an outdated Android version: without the OS update the owner of the device will not be able to run many new games and apps. The Sony Xperia Z4 Tablet WiFi has a great quality 10.1 inch screen with a resolution 2560 x 1600 pixels.

This tablet has non-removable Li-Po 6000 mAh battery that is a high battery capacity. Anyway you should keep in mind that the battery life largely depends on the kind of performed tasks: for example playing a game will run down the battery quicker than typing an email.

The tab has 3 GB RAM that is a great amount of memory for multi-tasking. Tablet has a very good amount of internal storage - 32GB. If you need more, you can select more expensive size options or you can simply expand the tab's storage with a microSD, up to 256 GB.

The Xperia Z4 Tablet WiFi has a very good for tablets 8.1 megapixel primary camera that can capture photos of a satisfactory quality. The tab's 5.1 megapixel front camera has a satisfactory quality for tablets. It can be useful in the case of a sudden need to make selfie. The Xperia Z4 Tablet WiFi supports 2g bands and has Wi-Fi. Also the tab has a Bluetooth v4.1 which means that you'll be able to use Bluetooth headphones for listening music for example. Sony Xperia Z4 Tablet WiFi comparisons to the rivals with the same price:

Before buying this tablet we recommend you to watch a few Xperia Z4 Tablet WiFi video reviews to receive full info about all tablet's specs and features. You'll spend just a few minutes but you'll get full and clear info about its specs which will help you to make the right decision.

If you still hesitate whether to buy this tablet or not, read all Xperia Z4 Tablet WiFi reviews by users and experts from CNET, GSMArena, TechRadar and others. You will get true info about the specs and the experience of usage from real users of this tablet. If you are already an owner of this tab please rate it and share your opinion! This information can be very useful to other customers.

Have you already bought this tablet?Rate Sony Xperia Z4 Tablet WiFi to help other customers!